2012 International Conference: Give and Take

You can still book a place through our website or email info@northlandsglass.com or call 01593 721229

We hope to see you there!

SATURDAY
9.15 Welcome, opening remarks
9.30 ‘Postmodernism’ – Keynote Presentation. Jane Pavitt is Head of the History of Design Programme and Dean of the School of Humanities at the Royal College of Art. Former Research Fellow at the V&A, she was responsible for many exhibitions. Her presentation will outline the thinking behind the V&A’s 2011 exhibition Postmodernism: Style and Subversion 1970-1990 in relation to ‘Give and Take’, the conference theme. Postmodernism was the first exhibition to explore the international impact of the style on art, design, architecture, film, video and performance.
Spanning a broad range of subject areas including fashion, craft, graphics, furniture and product design, the exhibition research aimed to uncover the histories behind the conception, making, dissemination and reception of postmodern artefacts and images. It explored the complex and often controversial debates within these design disciplines in the 1970s and 1980s. She will explain the research processes behind the exhibition, exploring postmodernism’s potential to foster interdisciplinarity, and the continuing legacy of postmodernism for design today.
10.30 Morning coffee
11.15 ‘Interventions in Nature’. Angela Jarman says: ‘ My work has always been influenced by the natural world, and the biological aspects within it. I’m trying to create pieces which have a sense of beauty, but which also have a quality about them which makes them slightly strange and disturbing, a lurking sense of unease, something uncomfortable, sinister.’ In her lecture Angela will offer an insight into her work, her sources of inspiration and her thoughts about glass as a material.
12.15 In a change to the advertised programme, Rupert Faulkner who is Senior Curator, Japan, in the Asian Department of the V&A will speak about the current V&A display ‘Kitty and the Bulldog: Lolita fashion and the influence of Britain’. The display explores the way in which British fashion – notably Victoriana, Punk and Gothic – has influenced the development of Japan’s ‘Lolita’ style, a cult fashion movement whose defining feature has been its preoccupation with cuteness, or ‘kawaii’. Rupert’s publications include Japanese Studio
Crafts: Tradition and the Avant-Garde (1995), with an exhibition of the same title. He is often a jury member at domestic and international ceramics competitions.
13.15 Lunch
14.30 ‘African Aesthetics: Beauty and Ugliness from Sub-Saharan Perspectives’. Ever since the early 20th century, when the European avant-garde started to show interest, African art has been increasingly appreciated in the West for its aesthetic qualities. But how do Africans themselves evaluate their artistic expressions? What counts as aesthetic quality in the eyes of the original producers and users of the masks and figures that have so fascinated the West? In this lecture we will be considering African conceptions of beauty and the ways these are realised in works of art.
Attention will be given to the relationship between aesthetics and ethics as well as to the religious function of beauty in African cultures. The discussion will also focus on the reverse of beauty, addressing the contexts in which intentionally ugly art forms function in traditional Sub-Saharan African societies. Wilfried van Damme teaches World Art Studies at Leiden Univerisity and African Art at Ghent Univeristy. He is an Extraordinary Professor at Tilburg University.
15.30 ‘Give and Take’. Jacqueline Poncelet will talk about the need to Give and Take in the context of public art commissions. She will give examples from the different projects she has undertaken over the last 14 years. No two projects have been the same. They have varied in every possible way from the size of the project, the materials, the context, the relationship to the commissioning parties and the time taken to complete each one. The only constant has been the need to Give and Take.
16.30 Tea and Lybster Harbour – for demonstrations of traditional skills and ‘Glass Games’ events
18.00 Opening of the Scottish Glass Society Exhibition.
20.00 Dinner and Conference Party

SUNDAY
9.15 ‘Fashion loves Art: A Passionate Affair’. Remember Yves Saint Laurent’s brightly coloured Mondriaan dresses of 1965 and the ‘OpArt’ mini dresses of the 1960s? They are vivid illustrations of the centuries-long love affair between fashion and art. Couturiers are past masters at capturing the contemporary ‘Zeitgeist’ in their designs, while artists have frequently used clothing as a way to give all-round expression to their aesthetic ideas. Madelief Hohé, Curator of the exhibition ‘Fashion loves Art: A Passionate Affair’, will explore some of the major themes in the show. From the 19th century, contemporary art has been strongly influencing fashion. She will discuss the reasons why that development has played so important a part in shaping identities and, specifically, how it is related to the increasing influence and freedom women now enjoy in society. Madelief Hohé is an art historian, author and curator of the Fashion and Costume Department at the Gemeentemuseum Den Haag in The Hague. There she has curated a number of exhibitions and has been responsible for the related publications.
10.15 Morning coffee
10.45 ‘Conceptual Mingling in the Space of Glass’. Susan Stinsmuehlen-Amend says: ‘Painting and firing of glass is a very old craft usually associated with stained glass, religious architecture and a narrative tradition. What greater, relatively obscure field of historic convention to transgress! I have always been a painter dealing with the “space of glass” no matter what permutations the work has taken. My conceptual approach to painting on glass is a paradoxical one, a hybridization of unlikely methods, styles, and imagery that reflect on the complexities of life. There is the thought that at a certain point the contradictions portrayed in the work cease to be perceived as conflict and create a logic of their own. This presentation will reveal intention, sources and (probable) meaning in my glass constructions and paintings.’
11.45 ‘Glass Games’ events and demonstrations
13.15 Lunch
14.30 ‘I am in motion’. Paul Marioni says: ‘I have a surrealist’s attitude and work with the medium of glass for its distinct ability to capture and manipulate light to create an illusion. Most of my work has been figurative and about human nature: what we do, why we do it, how we ornament ourselves, our heroes, historical moments, humour, sexuality, exotic and/or lost cultures, and a constant questioning. My work is often and purposefully left open to interpretation. I don’t want to tell the viewer what to think, but rather cause them to think. Science is used to explain, I believe that art is meant to evoke and engage.’
15.30 Summing-up by Tina Oldknow.
15.45 ‘Glenfiddich’. Glenfiddich Distillery is a Speyside single malt whisky distillery owned by William Grant & Sons. Founded in 1886 by William Grant, whose ambition was to create the ‘best dram in the valley’, 120 years later the distillery is still owned and run by the fifth generation of the same family. Glenfiddich malt, in its distinctive triangular bottles, is sold in 180 countries worldwide. Since 1970, the Glenfiddich Food and Drink Awards have honoured distinguished writing and broadcasting on food and drink in the UK and, from 2002, Glenfiddich has funded an international Artist-in-Residence programme with participants from all parts of the world. Bert Macor will discuss the distillery’s history and dedication to craftsmanship, concluding his talk with a tasting. Dutchman Bert Macor is the Senior Guide of the Glenfiddich visitor centre, and a passionate ambassador and connoisseur of malt whisky. He owned a wine and whisky shop in the Netherlands and has lived in Scotland since 2006.
16.30 Concluding remarks
The 2012 Conference is sponsored by Corning Incorporated, USA 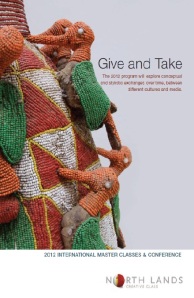 Master Classes for 2012 will be running between 29 August to 19 September.

Our International Conference ‘Give-and-Take’ will take place on Saturday 8, Sunday 9 September 2012. The conference will explore conceptual and stylistic exchanges over time, between different cultures and media.

Dates for your diary! 2012 Master Classes and International Conference

Our glass Master Classes for 2012 will be running between 29 August to 19 September, and instructors include Angela Jarman, Jacqui Poncelet, Paul Marioni and Susan Stinsmuehlen-Amend.

Our International Conference ‘Give-and-Take’ will take place on Saturday 8, Sunday 9 September 2012. The conference will explore conceptual and stylistic exchanges over time, between different cultures and media.

Take a look at our blog post from the 2011 Conference and our Master Class Flickr images – every picture tells a story!

Talks from our Resident Artists